Myth: Suicide is inevitable, no one can stop it.
Fact: If a person in crisis gets the help they need, they will probably never be suicidal again

Myth: Confronting a person about suicide might only make them angry and increase the risk of suicide
Fact: Asking someone directly about suicidal intent lowers anxiety, opens up communication and lowers the risk of an impulsive act

Myth: Only experts can prevent suicide
Fact: Anyone can help the tragedy of suicide
​"Suicide prevention training is extremely important because it creates a safe space, support system, and overall a more understanding society. Each day can become a struggle for people with mental health issues, but if we collectively have a basis to encourage, assist, and uplift each other, they might have a better future."
- Wayne State University Student on Suicide Prevention 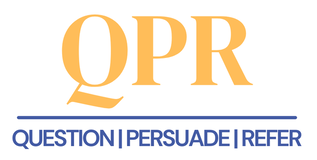 QPR stands for Question, Persuade, Refer; three steps anyone can take to help prevent suicide.
​
Mission: To save lives and reduce suicidal behaviors by providing innovative, practical and evidence-based suicide prevention training. We believe that quality education empowers all people, regardless of their background, to make a positive difference in the life of someone they know. 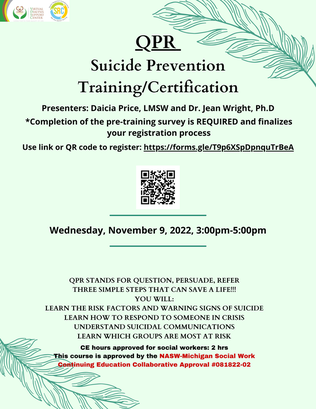